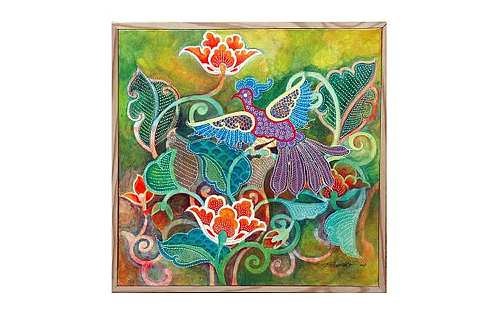 The artworks feature motifs found in traditional batik sarongs produced and worn in the early 1990s. 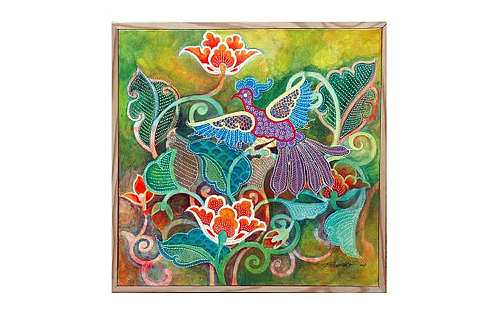 The ‘Serenity’ masterpiece, depicting a bird and floral motifs by Mohd Najib.

The 10-day exhibition, to be held until April 6, focuses on plant, bird and floral motifs, which according to Mohamed Najib, were meant to convey messages known only to the community of that era.

“Through research, I’ve found that the motifs decorating the sa-rongs convey certain messages.

“The dual functions of these motifs as decoration and message bearers have inspired me to exploit these elements in my work,” he said.

A native of Pahang, Mohamed Najib served as the Dean of the Faculty of Arts at Universiti Sains Malaysia for seven years before being appointed the National Art Gallery’s director-general.

Although he has held exhibitions in many countries, this was his first solo debut in Malaysia. “I’ve been fascinated since the first time I saw his paintings in the 80s.Galeri Seni Mutiara director Koay Soo Kau said Mohamed Najib’s works are innovative and creative.

“His work has demonstrated that traditional art forms can be visually exciting and interesting even when using acrylic paint on canvas instead of the traditional wax and dyes on fabric,” Koay said.

Koay said Mohamed Najib’s passion for art and batik enabled him to paint despite his tight schedule.

The exhibition is featuring 25 of his artworks. Some are put up for sale. The gallery is open from 11am to 6pm daily. Admission is free. 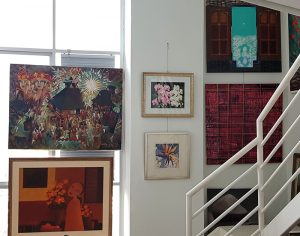